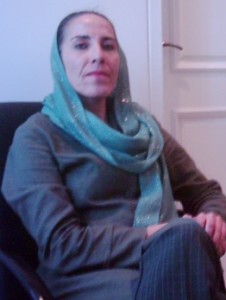 The Iranian psychoanalyst Mitra Kadivar has been held against her will for six weeks already and subjected to forced  medication and treatment in an Iranian psychiatric hospital in an apparent attempt to discredit and intimidate.


Apparently her neighbours misinterpreted her work (she was seen to be welcoming men, one at a time, and spending time together alone in a closed room, drug addicts visited her...) and reported her to 'the authorities' who responded with dark  humour - they concocted a diagnosis of 'late onset schizophrenia', and proceded to 'treat' her, against reason, and against her will.

Her students raised the alert to get friends to help to free Mitra, but after six weeks of quiet and discreet negotiations behind the scenes, which aimed (and finally failed) to rectify the situation, it was realised that the struggle would have to go up a notch, and go public. So, last Thursday, 7th Feb, the French philospher and writer Bernard-Henri Lévy posted a report of her plight on his website La regle du jeu  (in French) - for an English translation please click here. A report appeared the same day in Le Point magazine (in French) - for an English translation please click here. An interview with Jacques Alain Miller about Mitra also appeared in Le Point the same day (in French).

Mitra trained as a Lacanian psychoanalyst in Paris, and is a member of the Ecole de la Cause Freudienne , she has many friends there and around the world. Jacques-Alain Miller and Bernard-Henri Lévy are working together to mobilise the support of the various psy-networks  around the world, and have organised a petition, already signed by more than 2000 people including politicians, writers, analysts, & film makers.

A dedicated website - http://mitra2013.com/ -  has been constructed with pages translated into English, Italian, Spanish, Portuguese.

The Huffington Post also carried an article on 9th Feb (in French).

One email has been received from Mitra since the campaign has gone public, she gained access to the internet on Friday 8th Feb and sent a brief message to say thank you to Jaques Alain Miller and  Bernard-Henri Lévy for drawing attention to the attempt by the 'authorities' to 'get rid' of her.

Colleagues from Nice, France, would like to encourage you to write letters to Mitra, and found the address of the hospital:
Iranian Psychiatric Hospital

School of Medicine
Tehran University of Medical Sciences
Km Karaj Special Road
at the edge of beltway of north Azadegan,
after Ansaar town, behind of Shahid Tondgoyan parking
the Center of Psychiatry
Tehran
IRAN

If you would like to join the international network to help get Mitra out of danger, then please at least add your signature:  http://mitra2013.com/mitrakadivar/

If you would like to help mobilise more support and pressure, please do get in touch (see side panel).
Posted by Janet Haney at 13:13